Hassan and Marwa fled Syria with their sons into Jordan by hitching a ride on a cattle car. They were dropped into the middle of the desert near the Jordanian border. After walking for five hours, they finally arrived in Jordan, finding a small apartment in Amman where they live with their three sons.

Two of their boys, Ahmad and Lochan, are severely disabled. Neither can stand, walk, eat, speak, or bathe themselves. Marwa spends most of her days caring for the children. Their third son, Yeyha, is a lively five year old who already helps his mother care for his brothers. During their flight to Jordan, Hassan and Marwa carried their two disabled boys and Yeyha walked.

Hassan said their village became dangerous because of the close proximity to the airport. They had to move to protect themselves from the aerial attacks and bombings. Lochan (17) and Ahmed (7) both received extensive therapy in Syria before they were forced to flee, and now miss out on the therapy they received at home. The boys are the sons of Marwa’s sister, who was married to Hassan but died several years ago. Hassan then married Marwa, who gave birth to Yeyha; she now cares for all the children.

The family has received some assistance from NGOs but they still struggle to get therapy for the boys and cope with their extensive medical issues. Both boys are malnourished and were identified by Medair’s team of community volunteers, who screen Syrian women and children for malnutrition.

Yeyha’s dedication to the boys is inspiring and is a glimmer of hope and kindness in the midst of such difficulty. The nutritional supplements the family receives from Medair to help improve the health and weight of the boys doesn’t solve all of the families’ challenges, but is a significant contribution to the health of their sons.

EU-CORD works with Light for the World to provide training and to work with other members engaged in humanitarian response on how best to support children like Ahmad and Lochan. 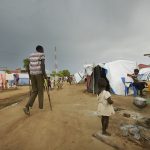 EU-CORD in Together We StandLearning Space
X