In this series of articles EU-CORD members share some of the work they have been doing in responding to the large numbers of refugees and migrants arriving in Europe. Here Jan Lamberink, Regional Programme Manager at Red een Kind, writes on the motivations behind and the ways in which Red een Kind have responded.

In 2015 Red een Kind decided to become active in Europe, supporting Syrian refugees on their long and dangerous journey to peace. It was for the first time in our organisation’s history that assistance was given on the European continent.

Red een Kind (Help a Child – HaC) provides a future for children living in poverty and connects them to people living in the Netherlands. With this mission statement in mind we could not look away when large numbers of refugees started to move from the Middle East to Europe. Resources in the refugee camps in the Middle East were drying up and rations were cut to such an extent that people decided once more to take up their remaining belongings and move on to safer pastures.

Red een Kind followed the fear-driven debate in Europe about hosting refugees with mixed emotions. Knowing that developing countries host over 86%[1] of the world’s refugees and knowing that European countries are obliged to offer protection to those who are not protected in their country of origin, being a Dutch NGO, not getting involved was not an option for us. We nevertheless feel that assistance in the region remains of utter importance.

The stories of the Syrian children on the way through Europe are appalling. Many of them experienced the cruel reality of war in different ways, losing relatives and loved ones. During their stay in refugee camps and on their long journey children suffered hardship in ways that no child should ever experience. 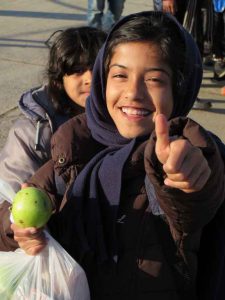 Towards the end of 2015 and the start of 2016 we have seen the percentage of children on their way through Europe growing. It was the fathers who tried to pave the way and request for asylum first, and now the mothers and children are following.

In an effort to make the child unfriendly journey a bit less troublesome, Red een Kind distributed food and non-food items (such as babyfood, fruit and hygiene packages), particularly to mothers and children. Winter clothes were distributed and wheelchairs were also given to and distributed by the Serbian Red Cross to assist those with mobility problems. In Serbia and Croatia we worked through national organisations. In Macedonia we supported our fellow EU-CORD member Dorcas in their efforts to distribute the same items. Staff working with our partner organisations did what they could to provide a listening ear or a helping hand.

Red een Kind acknowledges that there are no easy answers or quick fixes in this complex matter. We are not even close to influencing the root causes in this horrible story. But what we do know, however, is that all children (and each person) with a well-founded fear of persecution or a lack of protection in their own country should be able to count on heartfelt support. Including those children and families who make it to Europe.

Read more about the way EU-CORD members have responded by reading the article on Dorcas here and Hungarian Baptist Aid here. 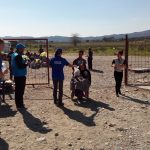 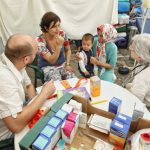