In Tanzania, Dar-es-Salaam district, Stromme Foundation works with the locale partner OCODE. They have activities towards children and youth through supporting schools and the program called BONGA.  This is a one-year program aimed at young girls. Bonga which means “let’s talk”, is a dialogue process to build confidence among the out of school illiterate adolescent girls (13- 19 years) and to develop their analytical capacity through life skills and vocational skills. Most of the beneficiaries have not been long in school, others have never gone to school for reason like, lack of school fees, cultural practices that disregard education for gender like girls or lack of access to education. Among others the dropped-out rate is high. The program also tries to avoid early marriages in some communities. The program gives the girls empowerment, restores self-esteem, dignity and gives a second chance to those that had lost hope and respect to self-reliant.

From 2017 a football program was connected to the project focus on girls.  Sports and games have now been part of the BONGA projects. The football activities for girls aim to challenge the existing gender stereotype, creating confidence and solidarity among girls and it is used as a tool for learning.

The project work closely in collaboration with Tanzania Women Football Association. For this intervention, priority will be given to female’s employees especially in the Bonga centers where all participants are female.

Football sessions are normally conducted 4 days in a week, and the training starts in the evening hours after girls have attended the life skill’s session in the morning.

There are volunteering coaches, who train with girls during the football sessions. They normally use school fields to train.

The Objectives of the football activity

“Playing football is traditionally considered as a male sport”; this is what was running into Edna’s mind when she first heard about the football program at a Bonga center.

“It was not easy in the beginning when I joined football, I joined the team just for fun without knowing that I have a talent on it which I am currently proud of” said Edna.

“I can now play football as boys, and I am really enjoying what I am doing because it has become part of me, and I have realized that my body is stronger and fit now. Football has enabled me to network with different people in different leagues such as Dar es Salaam Women league, East Africa virtual competitions which all together have increased my self-esteem and enhanced my understanding on various issues such as Poverty, Sexual Reproductive health, Hygiene and Sanitation following the follow ups seminars from the competitions.” Added Edna

Edna is the third born in a family of six children where her father passed away when she was 8 years old. Her father was the provider of the family so after his passing, life changed, and she was not able to proceed with further education. She is grateful of the football program, and she has decided to make football her career which she hopes to earn income from it and be able to run her life and take care of her family apart from the Vocational skills that she is also engaged in.

It is worth mentioning of the trainings that Edna participated such as Coaches training which enhanced her understanding on how to become a better Coach but also First Aid training which sharpened her skills on how to provide First Aid to her fellow football players while in the pitch.

Edna dreams of becoming the best world football player in the world and she believes through her continuous engagement in the football trainings; her dream will come true.

The football program has really helped to change the mindset of the community and I can hear from their stories in the community meetings on how they have started believing in the capacities that girls hold and how the football program is paving way for the girls’ to achieve their dreams. Said Peter Raphael Chawala; the Ward Executive officer of Kibamba ward. 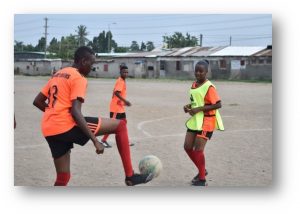 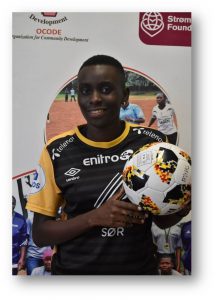 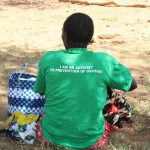 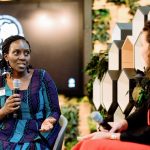