Ukraine – this is not an advocacy statement

The war in Ukraine brings the sorrow of conflict already experienced in many parts of the world to Europe’s doorstep. EU-CORD members have mobilised to provide humanitarian assistance to people still in Ukraine and those fleeing the conflict. More on that can be found here.

While these are European non-governmental organisations experienced in humanitarian response, as we have experienced in other parts of the world, much of the work would not be possible, or as responsive, without local civil society (which includes religious institutions and other faith actors) who are often the first responders in any crisis.

We are also part of churches and faith networks praying for peace and reconciliation for this and other conflict situations around the world.

I have been appalled (but perhaps not surprised) by the racial discrimination faced by Asians and Africans trying to escape into the neighbouring countries.

I’ve also been moved by the generosity shown by many European citizens who have offered accommodation or organised material support – food, clothing to Ukrainian refugees arriving in their cities. In Brussels, where I live, some of these will be the same people who responded to the Syrian refugees when our governments were slower to act. We do well to remember that not all European solidarity is driven in response to ‘people like us’ (whatever that means). It is also worth acknowledging the heartfelt public response to funding appeals launched by EU-CORD members will be additional to the regular support that they give.

It is also clear that on a global level, environmental impacts of climate change, covid impacts and the Ukraine conflict is creating the perfect storm of rising food prices and increasing levels of food and fuel insecurity. Prices are rising in Belgium, people are starting to starve in South Sudan, and on-ongoing food security projects are under threat.

Agenda2030 and the Sustainable Development Goals aim to take a global perspective to solve some of the biggest development challenges of our time. While we face numerous challenges in meeting the development goals, sadly, we are quick to experience the global impacts of a seemingly localised conflict.

As much as we collectively do our best, we fail in many areas. People with disabilities, to borrow a phrase from Agenda2030 are literally being left behind; concerns are being raised on the safety of people in institutions, and there are already reports that traffickers are taking advantage of the chaos to traffic vulnerable women, girls and children.

We are also concerned about the impact that the Ukraine crisis will have on work in other countries as donors re-allocate large amounts of funding from their development budgets to support donor refugee costs. Yes, the money has to come from somewhere, but wholesale cuts, which are not well thought through, can have unintended negative impacts.

As I write this, I am working (appropriately distanced) across from EU-CORD’s Advocacy Officer. This was supposed to be an ‘advocacy statement’, but sometimes there is a weariness to repeating the same carefully crafted statements. But just in case you’ve managed to read this far into the article, and  you haven’t worked it out for yourself – here are the advocacy points:

Image by Nati, supplied by Pexels 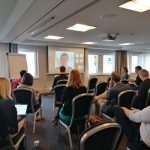